GRSF: Six Performances in Search of an Audience 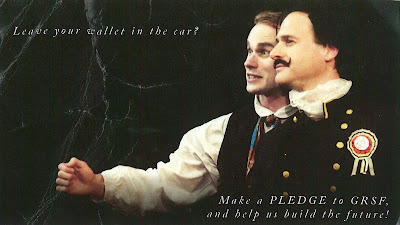 Love's Labour's Lost. Dir. Paul Mason Barnes. Perf. Doug Scholz-Carlson, Chris Mixon, Andrew Carlson, Brian Frederick, Christopher Gerson, Evan Fuller, Tarah Flanagan, Shanara Gabrielle, Katy Mazzola, Nikki Rodenburg, Michael Fitzpatrick, David Rudi Utter, Eva Balastrieri, Jeremy van Meter, Jonathan Gillard Daly, David Coral, Nick Demeris, Katie Bowler, Moira Marek, Duncan Halleck, Theo Morgan, Ceci Bernard, Chris Bernard, and Mitchell Essar. Great River Shakespeare Festival. Winona, Minnesota. 2009.And I'm certain that they'll find the audience they seek.
There are only six performances left in this year's Great River Shakespeare Festival. Therefore, though innumerable other projects have been pressing on my time, I really ought to take a bit of time to add my last comments on the productions and encourage you to see them.
Two Particularly Memorable Moments in Love's Labour's Lost:
The play opens with the entire ensemble singing "In the Good Old Summertime." The remarkable thing about this decision is that the director used it as something like a dumb show of the entire play. It wasn't an easy way to introduce us to the characters—in fact, only two are named—instead, it gave us a flavor of what was to come.
Even more astonishing was Chris Gerson's delivery of Don Armado's last lines—the lines that close the play. On the page, they seem straightforward:

Instead of these possible readings, Gerson makes them into something of an epilogue—like at the end of A Midsummer Night's Dream or As You Like It. The audience is being told which way it must go while the actors must head backstage to change out of their costumes and take off their makeup. The actors have done their work; it's now up to the audience to do its work—whatever that may be. Remarkable. Brilliant.

I have a few other points in my notes that I wish I could develop at greater length. But I can't. The first is the use of the supernumeraries—especially as they observe (as a kind of on-stage audience) the actions of the other characters. The second is the technical aplomb demonstrated in the production's stagecraft and lighting. For example, a photographer takes a photo with old-fashioned flash powder. Perfectly simultaneously (which is the extremely difficult part), the lights suddenly swell and there was a small auditory sound. Well done, whoever arranged that! The third point is that the company managed to avoid the tendency of "Guthrie asides"—additions to the text that become fairly annoying if overdone. Frequently (but not always), the characters cried "Olé!" at the mention of Don Adriano de Armado's name. But they varied it enough and didn't do it every single time—and that made it much more palatable.The Tempest. Dir. Alec Wild. Perf. Eva Balistrieri, Andrew Carlson, David Coral, Nick Demeris, Jonathan Gillard Daly, Michael Fitzpatrick, Tarah Flanagan, Brian David Frederick, Evan Fuller, Shanara Gabrielle, Christopher Gerson, Kate Mazzola, Chris Mixon, Doug Scholz-Carlson, Nicole Rodenburg, David Rudi Utter, Jeremy van Meter, and Tessa Wild. Great River Shakespeare Festival. Winona, Minnesota. 2009.
A few of the marvels of The Tempest:
The GRSF's production of The Tempest was less straightforward than its Love's Labour's Lost, offering a welcome variety to the festival. The play itself gives its audience more to think about, and that was reflected in this production.

An enormous amount of work must have gone into the production. Behind the main performance area (which included a number of moveable parts on an enormous circular track), an entire orchestra (it seemed) of flautists, percussionists, players-upon-crystal-goblets, and others provided the "Sounds and sweet airs that give delight and hurt not" for which the isle is so justly famous.

Caliban was played by Chris "Gollum" Gerson, and he did a remarkable job of presenting the director's view of the character—though I'm not certain I agree with it entirely. His Caliban crouched and crawled, simpered and served throughout the production. The main reason this was effective wasn't clear until the last scene. When Caliban says, "I'll be wise hereafter / And seek for grace," he almost stands almost upright—but not quite.

Tarah Flanagan's Ariel sat on top of a huge column made of metal struts. From there, she commanded a myriad of Ariels on the surface of the stage. Her delivery of the lines—especially those related to her desire for freedom from Prospero's service—was exquisite.

John Daly's Prospero was on the angry side—which was a really interesting choice. The best part of that is when he forgives all those who have wronged him. As Daly delivers the lines, it's almost like he's saying, "I forgive you—take that!" He's heaping burning coals on his enemies' heads, and that's cathartic for him and for his enemies and for his audience.

Naturally, more could be said. But you'll just have to go see one of the six remaining performances yourself. And you should.Links: The Great River Shakespeare Festival.
Copyright 2008-2039 by kj at 9:41 AM