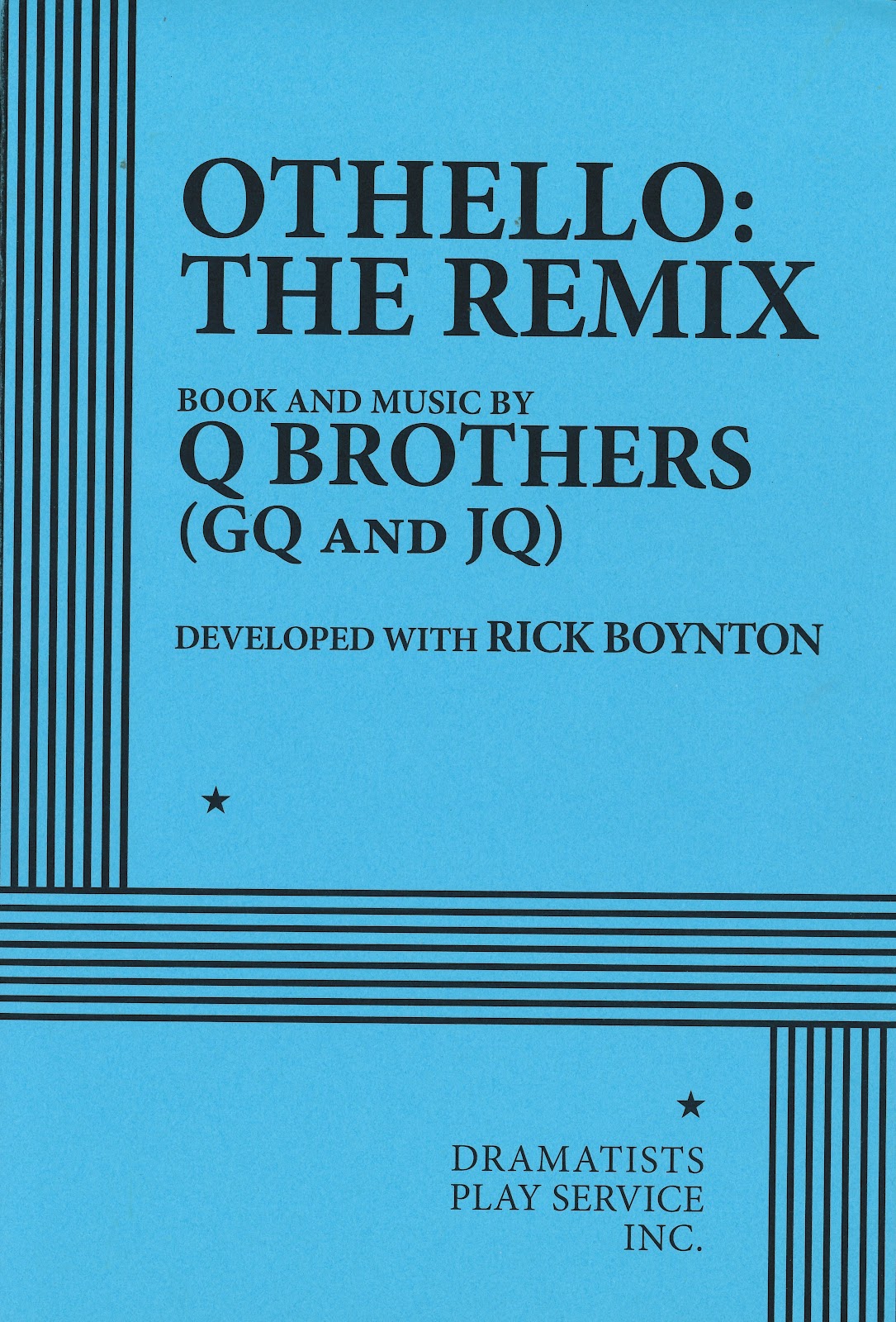 Q Brothers (GQ and JQ). Othello: The Remix. New York: Dramatists Play Service, 2018.I have a category of "Plays and Films that Must be Covered," but I also have a category of "Plays and Films that Could be Taught Depending on the Historical Period or How the Professor Happens to Feel."
For the past few years, I've incorporated Othello into my Shakespeare and Film class. I keep hoping that the issues raised by that play will become irrelevant, but they just don't.
And when we cover Othello, I usually bring in Othello: The Remix as an option for students. It's an interesting, humorous, tragic take on the plot. As some of the opening lyrics go, "Good storytellers borrow, but great ones steal, / So believe me the thievery is how we keep it real."
Othello: The Remix was commissioned by the Chicago Shakespeare Theatre and Shakespeare's Globe Theatre for the 2012 Globe to Globe Shakespeare festival. In conjunction with the 2012 London Olympics, all of Shakespeare's plays were performed—each in a different language. The language for Othello: The Remix is hip-hop. I remember that some of the performances were available for live streaming at the time, and I tried this just for fun—but it completely captivated me. It's the story of a child who goes from dirt poor to the biggest hip-hop artist ever, his romance with and marriage to a woman from the upper crust, and the engineering of his downfall by a fellow performer who feels he should get at least second billing. The show has four performers on stage—they take on nearly all the roles, changing their hats or minor parts of their costumes—one deejay who keeps the beats flowing, and the voice of Desdemona (she's never physically represented on stage). It's a high-energy, fast-moving, engaging show.
Unfortunately, no performance of the show has been commercially released, though you can hear a recording on Spotify or buy an .mp3 of it or get the script. I've been waiting for a performance to come out for a decade now so that I could feel free to share a bit of the show with you and point you to a place where you can buy it for yourself. Alas, I cannot.
But the release of that recording made me want to call your attention to part of the show. Here, then, is one fun song that I wanted to share with you. The video doesn't correspond with the audio—but the video is a montage of / trailer for a performance (it's available as an embedded video at the end of this post). The song starts with an introduction by Othello ("O to the T-H, E double L-O") of the member of his crew who is getting lots of radio play: Cassio. Cassio then takes over and sings his theme song.
I'm thrilled at the cultural references and the clever rhymes ("Classic as a shell toe sneaker on a B-boy, / Take a Trek with this Star—I'm Leonard Nimoy") and the attention to rhythm ("I've practiced enough, now I'm ready for the majors . . . / You're outdated like a pager"). I also like the creation of Cassio's character—he is a big talker (perhaps that's part of building his hip-hop reputation?), but he's essentially harmless. Have a listen / take a look / read the lyrics: 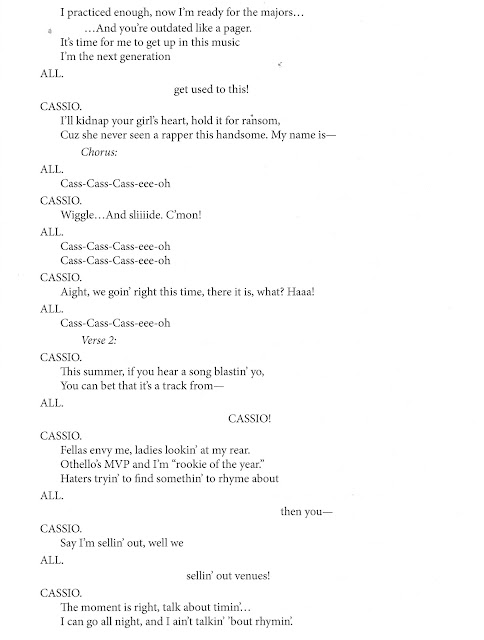 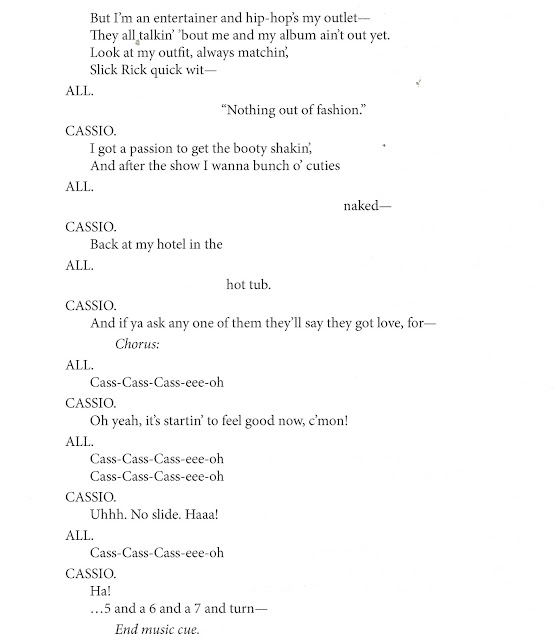 That should give you a bit of a feel for the show, and I wish I could give you more. But I'll only give you Iago's reaction to Cassio's being promoted above him—since it reflects the poppy nature of the song you just heard. He sings,

Cassio's this (What!) and Cassio's that (What!),
But he don't know jack, cuz Cassio can't rap.
He's a poster-child pin-up boy in a land of pop.
I'm half-man, half-Beastie Boy when I drop.
My [stuff] is John Blaze, this kid is just an actor.
I live what I say, he's just a candy rapper . . .
Every time he make noise, I get annoyed, man.
I heard his latest song and he belong in a boy band.

It's a clever way of expressing the anger Iago feels at being the gritty, real hip-hop performer being superseded by the commercial crossover artist.
Now that you've been convinced that this is a good and interesting show, what should you do? I've done the research, and I haven't found very many clips of performances online. The only substantial segment of the Globe Theatre production I've been able to find gives us the first five minutes—which are well worth watching, even though it's a bit rough from time to time and even though the sound quality of the actors isn't great:
Most of what you'll find online are interviews that contain brief clip of performances . . . like this one!
There is also a mini-documentary about the crew's performance at the Cook County Jail:
I've been hoping since 2012 for a commercial release of a performance to become available, but (alas) nothing more than the audio recording has made its way out to what would no double an eager public.
Click below to purchase the script from amazon.com
(and to support Bardfilm as you do so).

You can also purchase it from the Dramatists Play Service.
You can hear a recording on Spotify.
You can purchase an .mp3 of a performance of the entire show here.
Bonus!  Trailer / Montage for a Chicago Shakespeare Theatre performance:
Copyright 2008-2039 by kj at 6:00 AM