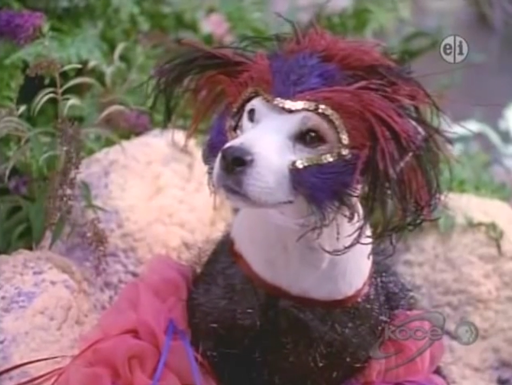 “Shakespaw.” By Adam Felber. Perf. Larry Brantley, Jordan Wall, and Christie Abbott. Dir. Allison Graham and Joey Stewart.  Wishbone. Season 1, episode 32. ABC. 20 November 1995.  We have for you a treat that has been years in the making. Students will frequently tell me about their Shakespeare experiences—notably, they talk about their initial encounters with Shakespeare.
It does take a while, but I'm sometimes able to follow their footsteps and track down the things they tell me about.
Here is such a moment!
The show Wishbone (eager to jump on the educational bandwagon) featured a cute dog who explored the literary world by taking on a variety of characters. In this episode, he becomes Ariel (because the local high school is putting on a production of The Tempest). The selection below concentrates mainly on the dog's imagined production, but there are elements of the high school production as well. As is typical in such shows, the bad guys in the show are also the bad guys in real life, and it's only after some wrangling that it all works out. Here you go!

Bonus! Some Shakespeare material from a Romeo and Juliet episode later in the show's run:
Links: The Episode at IMDB.
Copyright 2008-2039 by kj at 9:28 AM