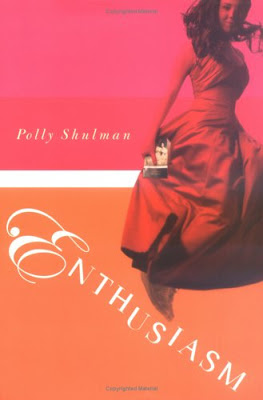 Shulman, Polly. Enthusiasm. New York: G. P. Putnam, 2006.
Although this Young Adult Novel is, strictly speaking, far more of a Jane Austen derivative than a Shakespeare-related book, it was enjoyable enough—and there was Shakespeare enough in it—to justify a quick post on it here.

The events of the novel center on Ash, a girl who is continually caught up in a never-ending series of enthusiasms. In this book, she has fallen in love with the world of Jane Austen, and she has determined to emulate Miss Austen's characters—especially in pursuing a boy of genuine merit to be the love of her life.

Naturally, my favorite parts involve Shakespeares. The students in the novel are putting on a musical version of A Midsummer Night's Dream entitled Midwinter Insomnia. Some of the lyrics are too good to miss:

Half an hour of hanging out with Hermia
Would give a seal or walrus hypothermia.
She's the Queen of the Ice.
She doesn't know the meaning of nice.
Turn the thermostat up and crank it!
I need another sweater and a blanket.

Insinuating snake!
He's a man on the make,
Out to get what he can take,
And take what he can get—
Which is nothing . . . yet.

The yet came as Hermia drank the tainted water and found herself falling under his spell. (119)

The whole novel is fun and fancy-free. I enjoyed it immensely. It's just the antidote necessary to a Young Adult Novel scene far too laden with Vampires and Zombies.