A Return to the Pshakespeare Psalm

In examining the issue, I cited the article by J. Karl Franson listed above. I got the impression from Franson's article that the 1539 Tavener's Bible had the words "shake" and "spear" in exactly the same positions, which would debunk any claims about Shakespeare's hand in the Authorized Version.

However, a careful reader (operating under the username "Facsao") called this into question.

When your sources are questioned, the best thing to do is re-examine them. Although it's taken some time, I tracked down a copy of the Tavener's Bible (on microfilm), found the Psalm in question (which is, following the Vulgate—long story—Psalm 45 and not 46 in that translation) and counted the numbers.
As the image below indicates, "Shooke" appears at number 56 from the top (55 if you count "in to" as one word—though it looks like there's a space between the two) and "spere" appears at number 48 from the end (47 if you skip the Selah). 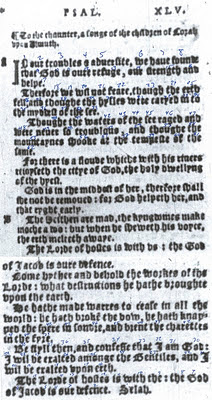 Facsao is entirely right. But how did Franson come to make such an error? Or, indeed, did he? Did I misunderstand Franson? Was Franson misleading? A glance at the article itself may help to clarify matters: 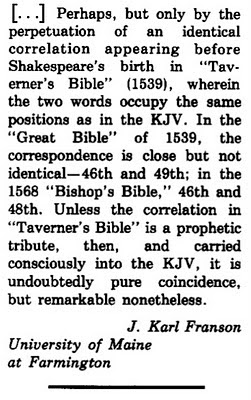 Although I'm not sure that they're intentionally misleading, the phrases "identical correlation" and "same positions" are at the root of the misunderstanding. I imagine that Franson meant something more like "the same relative positions"—the words occurring in roughly the same spots in the Taverner's Bible that they do in the King James Version.
Franson's conclusion still seems correct, but the evidence isn't quite as overwhelming as it's implied to be.
Perhaps the evidence from the 1560 Geneva Bible is actually stronger than that of the Taverner's. In it, "shake" appears at number 47 from the beginning and "speare" appears at number 45 from the end:

That's so close to the numerical appearance of the words in the King James Version—indeed, the average of the two numbers is 46—as to make it seem more and more unlikely that Shakespeare or (which might be more believable) a Shakespeare admirer had any hand in the translation of Psalm 46.
Links: Psalm 46 in the King James Version at Bible Gateway. The earlier post on this subject.
Copyright 2008-2039 by kj at 8:00 AM