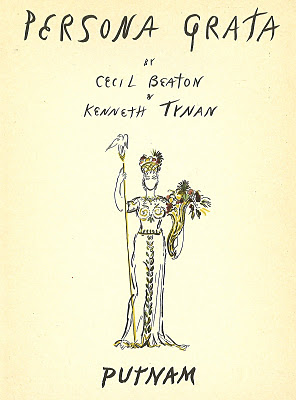 Beaton, Cecil, and Kenneth Tynan. Persona Grata. New York: Putnam, 1954.
Orson Welles has been making his way onto lists of Oxfordians complied by Oxfordians. I wish that I could simply say that there is no evidence to connect Orson Welles to the conspiracy theory that the Earl of Oxford wrote the works attributed to William Shakespeare. But I can say that the tiny bit of evidence connecting him to the idea is utterly disreputable.

Here's the full paragraph on which the claim about Welles being an Oxfordian is based (click on the image to enlarge it): 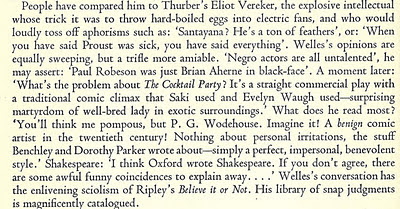 "Shakespeare: 'I think Oxford wrote Shakespeare. If you don't agree, there are some awful funny coincidences to explain away'" (98).

There you have it. After a few racist comments (which the authors of the book describe as "amiable"), Welles' capacity for "snap judgments" is demonstrated by these two sentences. The authors fail to provide any pertinent details about the quote, leaving us completely in the dark. To whom it was uttered? When did Welles said it? In what context? Was he, perhaps, joking? Had he, perhaps, been enjoying a glass too many of Paul Masson? They present no evidence to back up the claim that Welles said this at all.

Further, they compare the statement to "sciolism." It's a good word and an apt (and, yes, I had to look it up). The OED defines it as "pretentious superficiality of knowledge." In other words, if he said it at all, he said it in a completely offhand, uninformed manner.

The book is neither scholarly nor reliable. On this evidence (and on the absence of any other), we cannot conclude that Orson Welles was an Oxfordian.

Johnson, Paul. Intellectuals. New York: Harper and Row, 1989.
Returning to this highly-charged issue after a hiatus for thought and research, I find that the evidence for Welles' Stratfordianism is still strong.

In a book by Paul Johnson, I found some facts about Kenneth Tynan that may help to explain his journalistic practice and why the words attributed by him to Welles fail to fit with Welles' other statements (click on the image above to enlarge it and to see the text from the book):


[Kenneth Tynan] quickly established himself as the most audacious literary journalist in London. His motto was: "Write heresy, pure heresy." He pinned to his desk the exhilarating slogan: "Rouse tempers, goad and lacerate, raise whirlwinds." He followed these in junctions at all times. (326)

He certainly has done these things with his offhand remarks about Orson Welles. 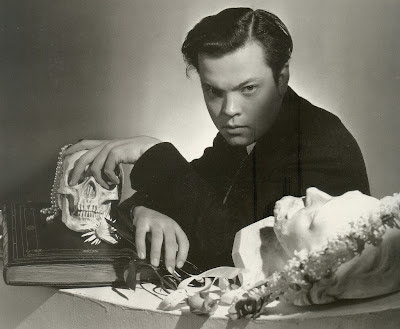 Welles, Orson and Peter Bogdanovich. This is Orson Welles. New York: HarperCollins, 1992. Reprinted under the same title by Da Capro Press, 1998.
This is Orson Welles, mentioned by contributors to the comments of this post, is a collection of interviews with Welles, transcribed and printed as a conversation with no intervening description—but with interjected sections from other publications by Welles. The book is pervaded with conversation about Shakespeare's plays, but there's not too much about the authorship of the plays. Frequently, there are passages that paint images of the man from Stratford as the author of the pays. For example, this passage imagines Shakespeare at a pub: 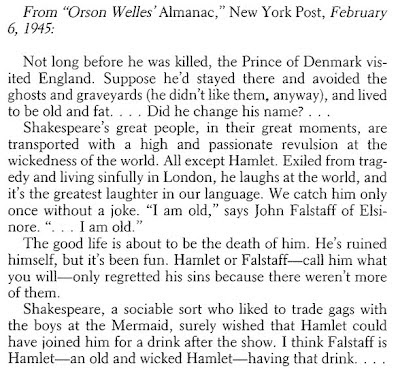 Here, the man is imagined with a hypothetical time machine: 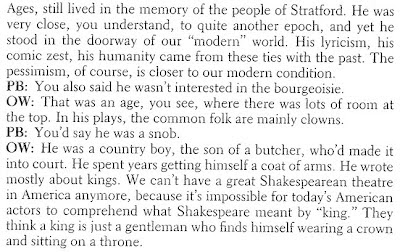 Those passage seem to establish that Welles thought of Shakespeare from Stratford as the author of the plays—even if his information about the particulars of Shakespeare's life (e.g., "the son of a butcher") are inaccurate.

But, to be as fair as it is possible to be, Welles also indicates that he believes that the more important aspect of a work of art is the work of art itself, not its creator. He even extends this to himself, pondering whether it matters that Orson Welles directed Citizen Kane. Please note that this does not equate to Welles questioning the authorship of the plays attributed to Shakespeare. He is merely making the point that the work itself is paramount and the artist is secondary. Please note that he does not doubt his own authorship of and contribution to Citizen Kane; he merely ponders whether that authorship and that contribution is relevant. Here's that section—which I provide with a fair bit of its context: 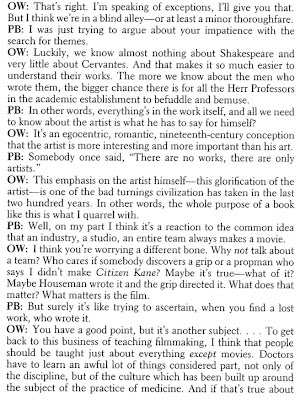 Considering all this, it's time for Orson Welles to be removed from the lists of Oxfordians—and that includes removing him from lists provided by those who think Shakespeare wrote the plays attributed to him. In James Shapiro's Contested Will, for example, this statement appears: "I can think of little else that unites Henry James and Malcolm X, Sigmund Freud and Charlie Chaplin, Helen Keller and Orson Welles, or Mark Twain and Sir Derek Jacobi" (4). Orson Welles does not belong in that sentence.

Update (5 August 2020):  I found a first edition of the Everybody's Shakespeare series that Welles wrote and illustrated in his teens, and it clearly makes fun of anti-Stratfordians and indicates that Shakespeare wrote the works attributed to him.

Interesting piece of revisionism. Maybe can you from this quotation also find proof that Welles was a Stratfordian?

Glad to oblige, Anonymous! I wish I could go that far, but I can't. The quotation does support the idea that Welles said racist things—something I deplore but something that is supported in many other much more reliable sources.

I've had several conversations about this piece recently with Oxforidans, and the Oxfordian double-standard for evidence has been at the heart of each. Oxfordians won't accept any of the dozens of pieces of contemporary evidence directly connecting William Shakespeare with the plays attributed to him, but they will cheerfully and without hesitation accept this tiny fragment of undocumented, unsupported, unverified gossip as incontrovertible proof that Wells was an Oxfordian.

Here are some quotations that could be taken as proof that Welles was a Stratfordian:
In a 1973 collection of interviews of Welles conducted in the late 60's and early 70's by Peter Bogdanovich, *This is Orson Welles,* here is what Welles has to say about Shakespeare:
"Shakespeare, remember, was very close to the origins of his culture: the language he wrote had just been formed; the old England, the Europe of the Middle Ages, still lived in the memory of the people of Stratford . . . He was a country boy, the son of a butcher, who'd made it into court. He spent years getting himself a coat of arms. He wrote mostly about kings. (211-12)"
"Luckily, we know almost nothing about Shakespeare and very little about Cervantes. And that makes it so much easier to understand their works. The more we know about the men who wrote them, the bigger chance there is for all the Herr Professors in the academic establishment to befuddle and bemuse (257)."
"Shakespeare was a popular artist. Dickens was a popular artist. The artists I personally have always enjoyed the most are popular artists (xxix)."
Now, do you still want to claim that Welles was an Oxfordian?

Thanks very much, Mark Johnson, for adding this here. I checked out that very book today, but I haven't had time to look through it. You've certainly saved me a great deal of trouble.

Since the earlier quotation is not verified by these quotations—indeed, it seems to be contravened by the "He was a country boy, the son of a butcher, who'd made it into court"—it seems even less likely that Welles ever seriously held an Oxfordian position.

The quote I love is, "You'll think me pompous, but P.G. Wodehouse."

I have in my possession a Mercury Theatre edition of Merchant of Venice with an introduction by Orson Welles, in which he clearly indicates a belief that Will wrote the plays by imagining Will discussing drafts of Merchant with Burbage in the Mermaid Tavern. The portrait of Shakespeare developed there as a business and professional theatre practitioner is utterly opposed to Oxfordian thought.

Additionally, other parts of the introduction (not by Welles but by Simon Hill) openly mock the anti-Stratfordian position. Welles appears to have full creative control over the edition (it is based on a radio-play in which he starred) so it would be odd for him to let Hill disparage the anti-Stratfordians as "comedy relief" if he himself were one of them.

Thanks, Alexi, for this additional information. I'm in the middle of a re-consideration of the issue. I'm reading up on the letters and life of Kenneth Tynan and Orson Welles, and I'll update this post when I have my thoughts together. At present, I've found no corroborating evidence--nothing I've found anywhere backs up the claims those two sentences purport to make. And your addition seems to continue to tip the scales in the Stratfordian direction.

It's weird that Welles said racist things, since in most respects, he was actually vehemently against racism. Take Welles's radio crusade against the officer who blinded Isaac Woodard, his involvement with African-American theatre in VOODOO MACBETH, the aborted IT'S ALL TRUE project that offered a wonderful portrait of Afro-Brazilian culture as part of encouraging solidarity during WWII, or this article here: http://www.unz.org/Pub/FreeWorld-1944jul-00008:10.

In what other sources did you find him saying racist things?

Thanks to all who commented. I've been reading the biography of Welles by Simon Callow, and I've found some more things that I've updated here:

To Nic, yes, he was very progressive for his time, but there's still some racism in his comments in the quote listed above.

Here's the Oxfordian response: "Clearly, he changed his mind later."