The Nine Words Most Likely to Anger King James 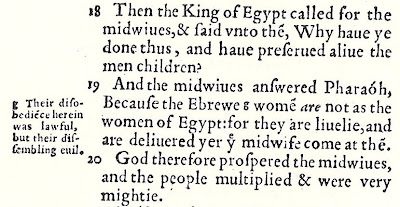 The Geneva Bible: A Facsimile of the 1560 Edition. Peabody, Massachusetts: Hendrickson, 2007.
In the few minutes between printing hundreds of pages of opening-day handouts and delivering them, I thought I'd try to squeeze in a micropost on King James' attitude toward the Geneva Bible.

He even hated it more than he hated all other English translations of the Bible—and that's saying something. That hatred was one of the reasons he was open to the suggestions of the committee to produce a new translation in English—the translation that would later be know as the King James Version.

In particular, he hated the marginal note on Genesis 1:19. Here it is: 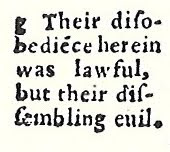 Their disobedience herein was lawful, but their dissembling evil.

That first part got James' goat as much as a pack of unfiltered Lucky Strikes would have (he hated tobacco, too). To think that any disobedience to a lawful monarch could be itself lawful was anathema epitomized! And that's even considering that obeying "The King of Egypt" here is to commit horrific atrocities.

To get a sense of how objectionable—indeed, how seditious—King James found such a statement, listen to his adresss to the Parliament on 21 March 1609:


Kings are justly called gods, for that they exercise a manner or resemblance of divine power upon earth: for if you will consider the attributes to God, you shall see how they agree in the person of a king. God hath power to create or destroy, make or unmake, at his pleasure, to give life or send death, to judge all and to be judged nor accountable to none; to raise low things and to make high things low at his pleasure, and to God are both souls and body due. And the like power have kings: they make and unmake their subjects, they have power of raising and casting down, of life and of death, judges over all their subjects and in all causes and yet accountable to none but God only.

Now that's monarchal power! James' subjects seem to have managed this authority (even as they managed under Elizabeth I and Henry VIII—who believed every word in that speech but didn't feel the need to say such things as blatantly as James did), but things changed dramatically under Charles I. Perhaps you recall the outcome of Charles' attempts to rule with such an iron fist wrapped in a concrete glove?

Click below to purchase the 1560 facimile of the Geneva Bible from amazon.com
(and to support Bardfilm as you do so).