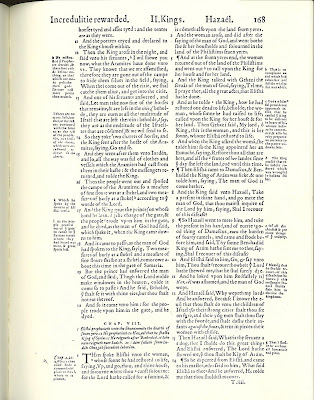 The Geneva Bible: A Facsimile of the 1560 Edition. Peabody, Massachusetts: Hendrickson, 2007.
Shakespeare's England was soaked in the Bible, and the enormous number of biblical allusions squeezed into Shakespeare's plays indicates how like a sponge Shakespeare's mind was (in a good way).

I've been doing a lot of work on Shakespeare and Calvin this summer, and I've also been reading through the Bible. That happy conjunction led to my noticing something in 2 Kings 8:7-15 that might have some bearing on Macbeth. And the recent arrival of a facsimile of the 1560 Geneva Bible (one of the main contenders for the title of "the version of the Bible Shakespeare probably used most") forms another happy conjunction—all the happier because of the astonishingly-low price Amazon.com is currently asking for the immense and remarkable volume! (See below for purchasing information.)

In the passage (quoted in full below), Ben-hadad, the King of Syria (the 1560 Geneva Bible reads "the King of Arám"), is sick, and he sends Hazael to ask the prophet Elisha whether he'll recover. Elisha says, "Oh, he'll recover all right. But he's also doomed to die." Then Elisha stares at Hazael until Hazael gets really uncomfortable. And then Elisha starts to weep. Eventually, he reveals that Hazael will become King of Syria and that he will serve as an instrument of God's chastisement of the people of Israel in that position. Hazael reports back to Ben-hadad the good news about Ben-hadad's recovery—and smothers Ben-hadad the next day.

The entire narrative strikes me as remarkably Macbethesque—not in the way Elisha might be compared to the Weird Sisters (Elisha's motivations are clearly different than the witches—he speaks the truth sorrowfully about the sovereignty of God while they seem to revel in the chaos they seem to hope will result), but in the similar ways in which Hazael and Macbeth respond to the truth presented to them.

Neither man is told that he will kill the King—yet the messengers seem to know that murder is a temptation for each man. Each man acts to hasten a prophecy he believes to be true, and each man becomes King as a result of his own actions.

Of course, the primary difference is that there's no Lady Hazael in the passage at hand. But when Hazael says, "Is this a damp bed cloth I see before me, the hem toward my hand?" it's pretty much a dead giveaway that Shakespeare had this passage in mind when he composed Macbeth.

Actually, allusions to scripture in Shakespeare (as opposed to biblical references in Shakespeare) are never as cut-and-dried as that. But I'm still pondering, in light of Shakespeare and Calvin, what to make of Macbeth and Hazael.

And I'm also wondering about Elisha's response. Is there some equivocation in his answer? Basically, he is asked whether the King will die of his illness, and his answer is "No, he won't die of the illnesss—nudge, nudge, wink, wink." He doesn't encourage Hazael, but he shows Hazael that he knows Hazael's heart.

Finally, I'm thrilled to possess the 1560 Geneva Bible! Not so long ago, its price put it out of the reach of all but large research libraries. Now it can sit on my desk to be consulted at will (especially thanks to the book allowance my college gives me every year) at any time of the day or night.

Especially interesting are the marginalia. I've included an example above—one in which we're told that, "Vnder pretence to refresh or ease him, he styfled him with this cloth." It gives a certain dramatic motivation or stage direction to the text that I find immensely appealing.

In a similar way, the Geneva Bible glosses Elisha's comment about the recovery of Ben-hadad: "Meaning that he should recover of this disease: but he knewe that this messenger Hazaél should slaie him to obtaine the kingdome."

Click below to purchase the 1560 facimile of the Geneva Bible from amazon.com
(and to support Bardfilm as you do so).


Now Elisha came to Damascus. Ben-hadad the king of Syria was sick. And when it was told him, “The man of God has come here,” the king said to Hazael, “Take a present with you and go to meet the man of God, and inquire of the LORD through him, saying, ‘Shall I recover from this sickness?’” So Hazael went to meet him, and took a present with him, all kinds of goods of Damascus, forty camel loads. When he came and stood before him, he said, “Your son Ben-hadad king of Syria has sent me to you, saying, ‘Shall I recover from this sickness?’” And Elisha said to him, “Go, say to him, ‘You shall certainly recover,’ but the LORD has shown me that he shall certainly die.” And he fixed his gaze and stared at him, until he was embarrassed. And the man of God wept. And Hazael said, “Why does my lord weep?” He answered, “Because I know the evil that you will do to the people of Israel. You will set on fire their fortresses, and you will kill their young men with the sword and dash in pieces their little ones and rip open their pregnant women.” And Hazael said, “What is your servant, who is but a dog, that he should do this great thing?” Elisha answered, “The LORD has shown me that you are to be king over Syria.” Then he departed from Elisha and came to his master, who said to him, “What did Elisha say to you?” And he answered, “He told me that you would certainly recover.” But the next day he took the bed cloth and dipped it in water and spread it over his face, till he died. And Hazael became king in his place.

Where does Hazael say, "Is this a damp bed cloth I see before me, the hem toward my hand?" Is it only in some translations or something?

That quote is only in my little joke—if Hazael had said something of the sort, Shakespeare's "Is this a dagger I see before me, the handle toward my hand?" would have a clear and pointed origin.

Sorry if that was confusing!