Amend, Bill. "Pencil Test." Some Clever Title: A FoxTrot Collection Blah Blah Blah. Kansas City: Andrews McMeel, 2016. 73. It's always nice when Shakespeare and math come together in harmony—even if it's only tangentially. And it's even better when it's in a FoxTrot comic.
I try to keep my eye on the Shakespeare in FoxTrot (search the blog for other moments of Bard / Amend connections), but I missed this one, perhaps because it's only tangential. However, knowing the Shakespeare part of the math question will get you a long way toward solving it (though you might, as I did, have to Google the atomic number of boron to be certain (though, if you look and read carefully, the comic itself cleverly answers the question in its own context). 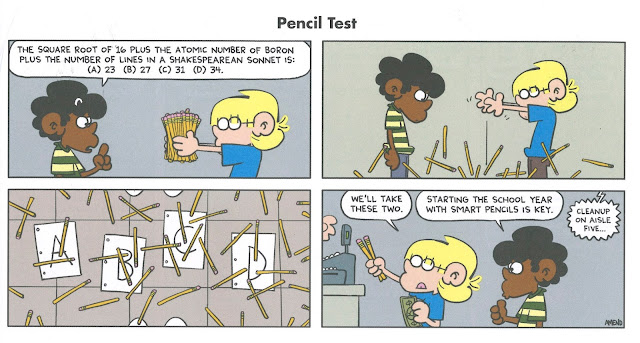 Click below to purchase the book from amazon.com
(and to support Bardfilm—and, perhaps obviously, Bill Amend—as you do so).