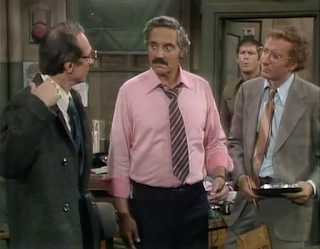 Hi again, it's me, anonymous! This is the first chance I've had to return after your earlier sitcoms post, and I can only say... Wow, Bardfilm, you and Shakespeare Geek are good! I had no idea there were other Shakespeare lovers who were also old sitcom devotees. I had forgotten the Barney Miller & Grace Under Fire episodes, both of which I have seen in the past few months.

I'll add a couple more that I don't think either of you have mentioned yet: Lots of Shakespeare references in *The Dick Van Dyke Show*. One I saw again recently was "Big Max Calvada." Before leaving the writer's office, Max says "'I can no other answer make but thanks, And thanks, and ever thanks' - that's Shakespeare." After he leaves, Rob says: "'Some are born great, some achieve greatness, and others [sic] have greatness thrust upon them' - Al Capone." Later in the episode, Max says, "If it were done when 'tis done, then 'twere well it were done quickly." (btw, Max also quotes Edmund Burke. That Big Max sure knew his potatoes!)

There is also a musical rendition of part of the "quality of mercy" speech in the "Dear Mrs. Petrie, Your Husband Is in Jail" episode.
(And I recently saw a Cheers episode, "Diane's nightmare," where Sam recites the beginning of the same speech.)

Given that the main characters are an actress & a writer, *That Girl* also has some WS references. In the episode "There Was a Time Ann Met a Pie Man," Ann is upset after having appeared in a show where she gets a pie in the face, and is berating Don for not having stopped it. "Hamlet never would've allowed them to do that to Portia," she says. "They weren't in the same play!" says Don. Ann replies, "If he loved her enough that wouldn't have mattered!"

P.S. I wonder if anyone else has noticed the similarities between Norm Peterson and Falstaff? I would love to see George Wendt in the latter role!

Norm as Falstaff and Cliff as Bardolph? It seems like a match made in Hollywoodland.

Thanks for the tips! I can't always track everything down (the M*A*S*H episodes, for example, have many small allusions to Shakespeare but nothing necessarily deep and substantive), but I do keep a running list of things to examine! The musical version of "quality of mercy" seems particularly intriguing.

Hmmm... I think maybe Cliff would be Pistol - another bloviator of great renown!

And here's the video of Andy Griffith's retelling of R&J: https://www.youtube.com/watch?v=Dmor_dOtw_E
I was talking in one of our meetings about how Montagues & Capulets were like Hatfields & McCoys. Afterwards I realized this was probably why I thought of them!

Thanks! I've seen that, but thanks for sharing it with all Bardfilm's readers.

I'll keep my eyes out for more, and I'll post them when I get a chance!