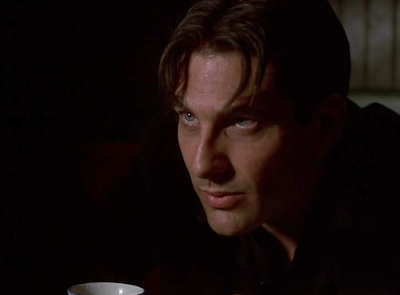 Let the Devil Wear Black. Dir. Stacy Title. Perf. Jonathan Penner, Randall Batinkoff, Norman Reeds, and Mary-Louise Parker. 1999. DVD. Unapix, 2000.
Some time ago, I chanced upon a VHS tape of this film. I watched part of it, fast-forwarded though a fair bit of it, and abandoned it. But I remembered it when thinking about how bad badly-done Shakespeare derivatives can be.

This film is a derivative version of Hamlet set in modern Los Angeles. The cover says, "Something is rotten rotten rotten in the city of angles," and I suppose that doesn't count as false advertising—except it seems to apply to what happens in the plot when it more neatly fits the quality of the film.

I'm usually thrilled by derivative versions, finding that they point us back to the text in interesting ways. This film, even though it follows the plot of Hamlet more than most, doesn't work. It ends up being crude and amateurish, and it doesn't seem to have anything thoughtful to say about Shakespeare's play.

It took some time to find a clip that would capture the film well without being vulgar or indecent, but I managed to extract this one. For lack of a clearer analogy, this scene may be something of a version of the play-within-the-play. Jack (the Hamlet analogue) reveals to Carl (our Claudius figure) that he knows about the adrenaline pills (analogous to hebenon in the ear):

Steer clear of this film—there's just not much here.
Links: The Film at IMDB.