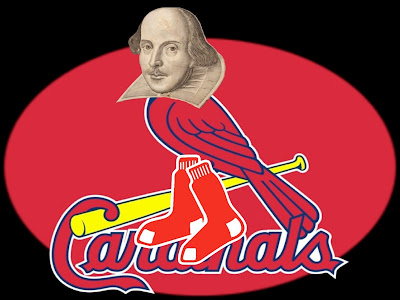 —Other Cardinal fans are taking comfort in Shakespearean Sonnets as they wait for Game Six to begin:


—I've found a Shakespeare quote that offers a bit of advice to Kolten Wong, and I offer it sincerely, without rancor, blame, or anger:

"You have scarce time to steal" (King Henry VIII, III.ii).


—I've developed a few lines commenting on the impediment call (or, as MLB seems to call it, the "obstruction call") that ended Game Three:

Let me not to the runner on third base
Admit impediment. Runs must be runs,
Though altercation may fill up the place.
Lay down your bats, and let the game be done.


—I'd be foolish not to track down my rhyming dictionary at this point, but Hope is a lover's staff, and I shall walk hence with that. Go Cards!