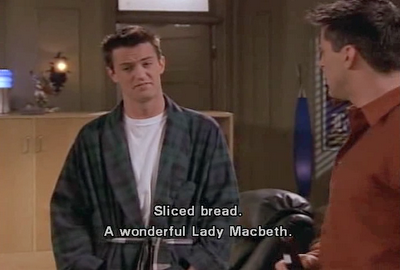 So, I didn't understand the joke anyway. What is Sliced Bread? I watched Friends in translation and understood it as a name of some foodstuff, in Russian translation it was kinda 'sliced sausage'.

The difficulty is that it's an idiom that is not used quite properly. The idiom is "The best thing since sliced bread," and it means something like "An amazing thing." Joey doesn't use it right, and Chandler plays up on that by pretending the phrase "sliced bread" is the name of an actress: "Sliced Bread."

I like the idea that the Russian translation takes "bread" to mean "sausage."

Take care, and thanks for the question!

The Ukrainian translation was excellent, from my point of view.
It was something like:
- she thinks she plays like Saint-bernard [dog breed, like the one from the Beethoven comedy movie]
- you mean, Sarah Bernhardt [french actress]
The pronunciation is almost the same, despite of spelling. And it’s really funny :)

I love all that enormously! Thank you so much, Traveller!