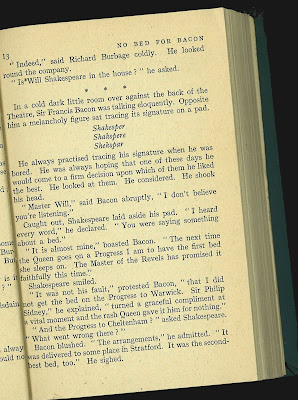 Interesting post indeed. However its might have mentioned a far older issue which I am sure you know. There is a great debate about the authorship of Shakespeare. The most important candidate... Francis Bacon (hence the title of the book). One of the points for doubting about Shakespeare... there are more thatn 36 spellings of his name in different documents. Tom Stoppard with all his knowledge about Shakespeare must have known this. Hence the coincidence. If it was not such, I agree with you, the credit should be there.

By the way, great blog, just discovered it

Thanks for the comment! Yes, it's a marvelously quick and witty way to abandon the authorship issue at the outset. The question is brought up only to laugh at it and drop it immediately.

Brahms and Simon were wonderful satirists and it's a great shame that Simon's early death prevented more wonderful collaborations. In the latest pb addition of "No Bed..." Ned Sherrin (Brahm's literary executor)mentions the situation but is not specific on whether any legal actions were taken. I suspect that a private deal may have been done.